Neuromodulation is the overarching term to describe a variety of technologies, such as neurofeedback, which are used to bring relief from problematic symptoms affecting a wide range of mental health issues.

Before exploring how we study brain activity, let’s have a look at brain anatomy and function. 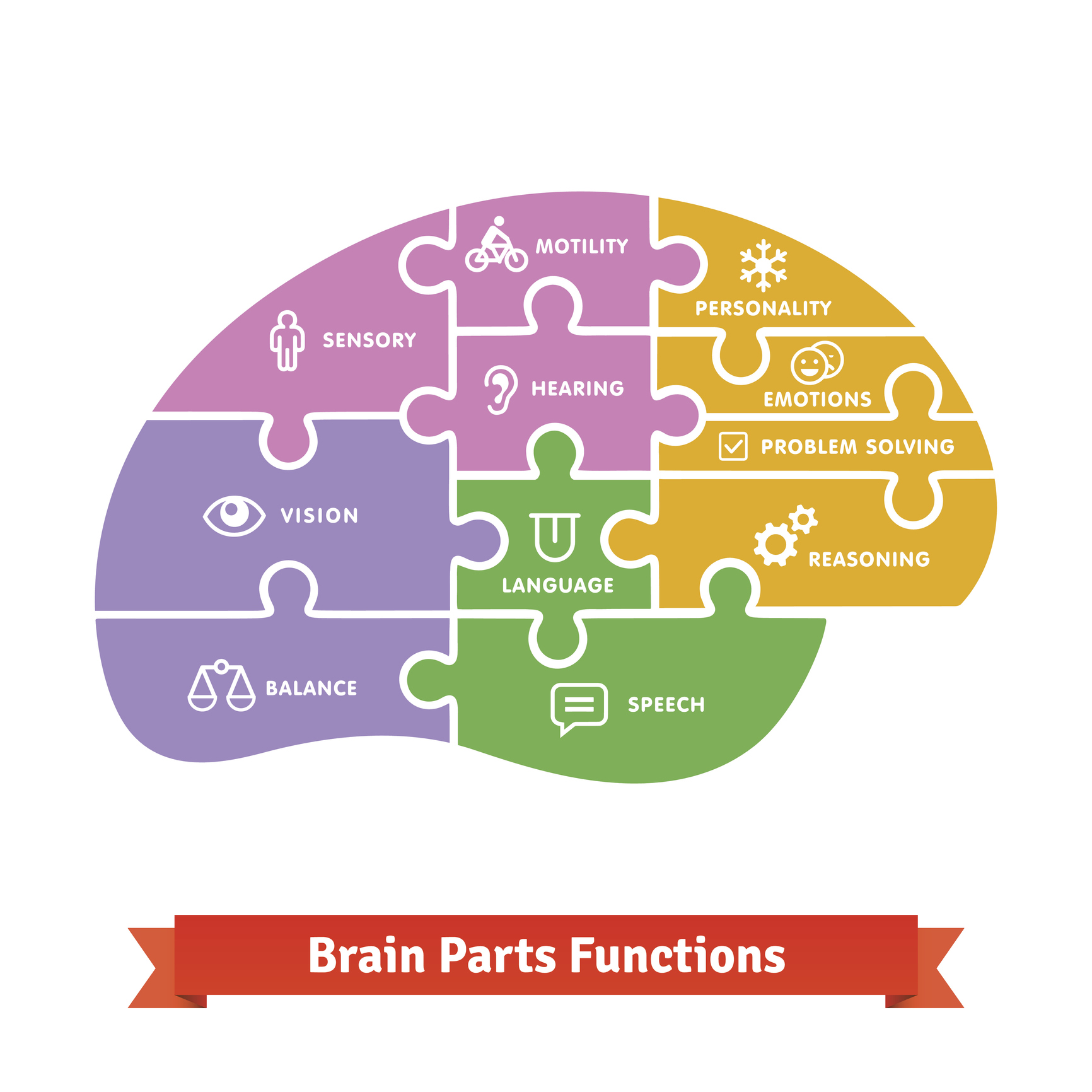 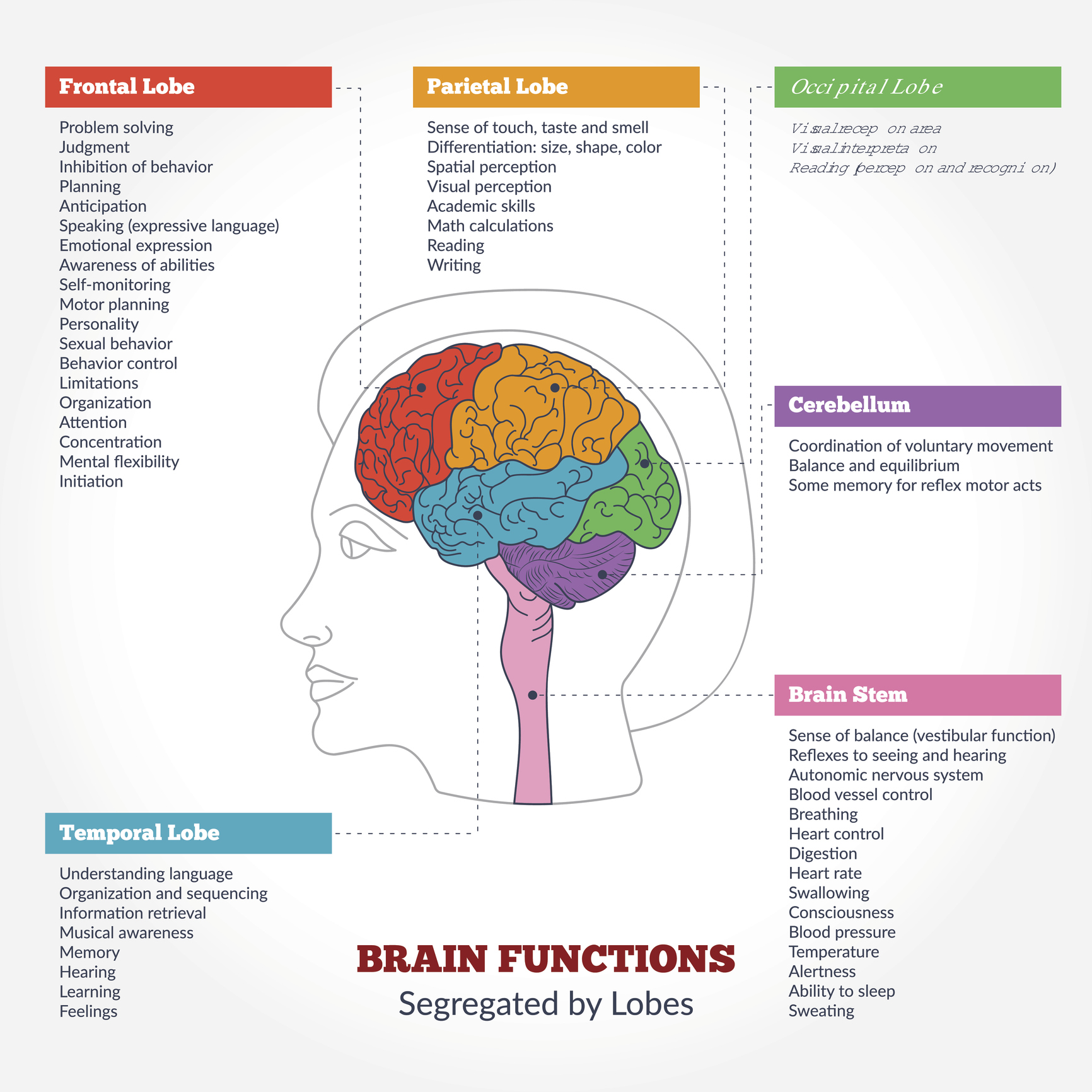 Electroencephalography (EEG) is used to show brain activity in certain arousal states, such as alertness or drowsiness. Just as an ECG (electrocardiograph) measures electrical activity in the heart, an EEG (electroencephalograph) measures electrical activity in the brain. It shows the amplitude (microvolts) of activity in pre-defined frequency bands (Hertz) or power (microvolts squared/hertz). When the amplitude of specific brainwaves persistently deviate from the normal fluctuations in certain parts of the brain, there is a strong correlation with specific symptoms and behaviours.

In traditional medicine EEG’s are used primarily in the diagnosis of epilepsy. They also evaluate altered states of consciousness including anaesthesia, coma and brain death.

Quantitative Electroencephalography (QEEG) is one of the tools we use at the Brain Collective. It is a 3D functional imaging technique and explained in detail below. Millions of neurons interacting with each other in our brains produce waves of electric current. These neuronal oscillations are called brainwaves and are measured in Hertz (cycles per second). A normal brain produces fluctuations in these oscillations all the time, certain ones being dominant dependent on the arousal and activity at any one time. The patterns of these waves in different parts of our brain differ with age, stages of life, gender and mental health. Maps of people suffering from different symptoms or functional difficulties show patterns that deviate from the norm.

Gamma is a ‘chirping’ frequency and is associated with higher levels of consciousness, insight and self-awareness. It is seen in states of intense concentration and perception. It is also present when our brain organises information and when different parts of our brain simultaneously process information.  Dysregulated or persistent gamma activity has been correlated with mood disorders, chronic pain syndromes, movement disorders e.g. Parkinson’s disease, Alzheimer’s, Epilepsy and Head Injury.

Beta Waves (predominantly found in the pre and post central gyri) can be split into low Beta, Beta, and High Beta. Beta states are associated with wakefulness, conscious thought, sharpness, alertness and engagement.

A deficiency of Beta is seen in conditions such as ADHD, depression and learning difficulties. Coffee and other stimulants increase Beta waves and alertness.

If you’ve come across the term Mu wave, it’s actually a High Alpha rhythm prominent when the body is physically at rest and found over the Sensory Motor Cortex in a band from ear to ear. Present since infancy, it is connected with a child’s ability to imitate or mimic which is essential for the development of social skills and non- verbal cues. The Mu wave is also called the wicket system (because the rounded EEG waves resemble croquet wickets!) and is still being studied especially in connection with Autism and other conditions affected by the Mirror Neuron system.

Alpha normally originates from the back of the brain in the Parietal and Occipital lobes.Alpha waves are associated with relaxation, visualisation, creativity, meditation, rest, reflection, intuition, tranquillity, receptiveness, passiveness and living in the moment. They also associated with mental co-ordination, integration of mind and body and long-term learning. Too much alpha, particularly when predominant in the frontal lobes in the eyes open state is associated with being  spacey, dreamy and unable to focus. Low levels of Alpha and we feel stressed – common in cases of insomnia and OCD. Antidepressants, alcohol and other drugs and relaxants increase alpha waves.

SMR (The sensorimotor rhythm) is a low Beta rhythm in the brains sensory motor strip. It is an oscillatory idle rhythm of synchronized electric brain activity. It appears in spindles in EEG over the sensorimotor cortex.

People on the autistic spectrum and suffering from epilepsy and learning difficulties may benefit from an increase in SMR activity via neurofeedback training.

Most prominently seen over frontal mid-line locations, Theta is the idling frequency common in young children which is the reason for their ability to undertake imaginative play and live in the magical world of believing in Father Christmas and the Easter Bunny!! It is also evident during the tranquil, drowsy transition from sleep to wakefulness, REM (light) sleep, deep relaxation, and hypnosis. It’s fertile ground for sub-conscious intuition, vivid visual imagery, creative imagination, problem solving, insight and inspiration. Too much theta in the awake state is seen in clients with Dementia, brain injury, ADHD, depression, hyperactivity, impulsiveness and inattention.

In healthy adults, delta power is broadly distributed at the scalp. Delta waves are prominent in dreamless (non-REM) deep sleep, transcendental meditation and intuition where there is no awareness of the body. It’s frequently found in babies and sleeping adults and absolutely essential for healing, regeneration, restoration, revitalisation, renewal and the healthy functioning of the immune system. Too much delta is common in people with brain injuries, learning problems and moderate- severe dementia.

Niels Birbaumer has undertaken most of the research into the realms of slow cortical potentials and infra low waves. Although they are harder to detect and record, we know that they play a key role in the organisation of neuronal networks, oscillatory patterns, sleep patterns, cognitive performance and advanced states of meditation and clinical outcomes correspond with much of the research undertaken for specific conditions with traditional frequency band training e.g. seizure management, ADHD, migraines etc.

Neurofeedback therapy uses the connection between the brain’s physiology (what is physically happening in our brain in terms of electrical frequencies) and our psychological states (the emotions we are feeling). The emotions we feel directly correspond with electric activity taking place in our brains.

EEG as we have seen earlier, measures the electric activity in the brain in terms of neuronal frequencies.

The frequency composition of a normal healthy EEG recorded from every brain region is predictable. It changes with normal development and aging. These normal values have been described statistically and confirmed by researchers all over the world.

Significant deviations from normative values are found in cases with a variety of symptomatic and functional difficulties.

QEEG is a form of EEG which uses various kinds of technologies to produce 2D and 3D images of the brain’s activity/frequencies in real time. It is non-invasive, easy to repeat with good reproducibility. We use the 2D and 3D maps to understand how the brain is organised or disorganised and can pinpoint problem locations. It helps us to understand and communicate the patterns we see in the maps, with different symptoms, emotions and behaviours.

A cap with 19 electrodes is placed on the head. The locations of the electrodes on the cap are pre-defined and internationally standardized by the 10-20 electrode placement system. The system is named because electrodes are placed at intervals 10-20% between our heads key landmarks. The cap is connected to a computer to measure your brains electric activity (see EEG above).

Raw EEG data is first properly collected, digitized and then edited to remove unnecessary artefacts (for example clenched jaws, eye blinks showing up on the EEG are edited out).  The editing can be automated but is always manually checked. The data is then put through various software, analysed and computed into different visual maps.

Some of the maps visually define for us the speed and processing efficiency of the brain. Some maps provide 2D information identifying from which brain lobe the underlying problem stems, others provide 3D topographical information specifying the exact problematic Brodmann areas of the brain.

All the maps are colour-coded to show the amplitude of each of the specific brain frequencies.  The resulting pattern of colours displayed shows us how the individual’s brain deviates from that of a highly functioning person of the same age and gender.

Below are different examples of maps we use to understand brain activity.

Sophisticated software programmes are used to record, digitize, edit, compute and make sense of raw EEG data. We use the Thatcher normative database for the 2D maps and the swLORETA algorithm and NeuroNavigator (like a GPS tracker) for the 3D maps.

We use QEEG mapping to provide the client with a visual representation that often correlates with, and helps them to understand their challenges. 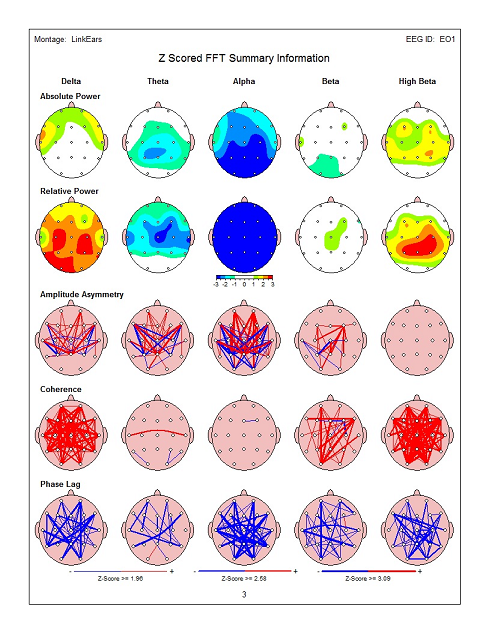 The assessment process enables us to fully understand symptoms, functional difficulties and goals for improvement. Based on this information, we will recommend Neurofeedback and/or other neuromodulation techniques to help train your brain to regulate its function and remediate unpleasant physical and emotional symptoms or behaviours.

Ours is one of the few practices in the world that is adept at using a variety and blend of neuromodulation techniques without having any one preferred, so clients are best served.

Explore Neurofeedback, other Neuromodulation Technologies or Your Journey with Us or Call Us now to book a mapping.